The not so big fat Indian wedding In January, news of India’s first “metaverse” wedding reception went viral. As per reports, the couple from Tamil Nadu sent invites to their 2,000 guests in the form of non-fungible tokens to attend the virtual ceremony to be held at Hogwarts, or, more accurately, a digital recreation of the school of magic. This Harry Potter-themed wedding is only one example of how the wedding industry in India has changed during the pandemic.

In January, news of India’s first “metaverse” wedding reception went viral. As per reports, the couple from Tamil Nadu sent invites to their 2,000 guests in the form of non-fungible tokens to attend the virtual ceremony to be held at Hogwarts, or, more accurately, a digital recreation of the school of magic. This Harry Potter-themed wedding is only one example of how the wedding industry in India has changed during the pandemic.

This might be an extreme case, but young couples and wedding planners across the country have had to adjust and adapt to the changing situations in a Covid-stricken world. No longer do hybrid weddings, where the majority of the guests join in via Zoom or watch a livestream of the wedding ceremony, sound strange.

Take the case of Sandipan Sarkar and Aditi Das. The Burdwan couple had to postpone their wedding, initially scheduled for August 2021, to January 2022, but while preparations for the big day were in full swing, Sarkar tested positive for Covid. Not willing to wait longer, the two decided on a hybrid wedding as soon as Sarkar recovered. Around 50 family members were invited to attend in-person and the event was livestreamed via Facebook Live and YouTube for their other guests. “Having to reduce the number of guests was difficult. My aunt and her family based in Kashmir had already booked their tickets and my friends in Bengaluru, Noida and Mumbai were looking forward to attending. I could neither dishearten them nor take the risk of crowding the venue with 350-odd guests. I felt the hybrid mode would make everyone feel included,” says Sarkar. He even ensured that all the guests attending the event, physically or virtually, got a feast. He tied up with Zomato to deliver wedding meals at the doorstep of each guest.

Delhi-based singer and composer Rashmi Agarwal’s daughter, too, got married in Mumbai in July 2021 in a small ceremony. All the rituals were done at home with just 25 to 30 close friends and family physically present and 150-200 guests, including Rashmi’s son in Singapore, joining in from different parts of the world via Zoom.

The Indian wedding industry, estimated to be worth $50 billion (around Rs 3.7 lakh crore) in a 2017 KPMG report, has been hit hard by the Covid-19 pandemic. The over-the-top, multi-event, four-to-five-day celebrations have given way to one-day weddings with guest lists pared down to just 50-100, depending on the limit set by each state, as opposed to 500-1,000 that was the norm. This has taken a heavy toll on the formal and informal sectors associated with the wedding industry. 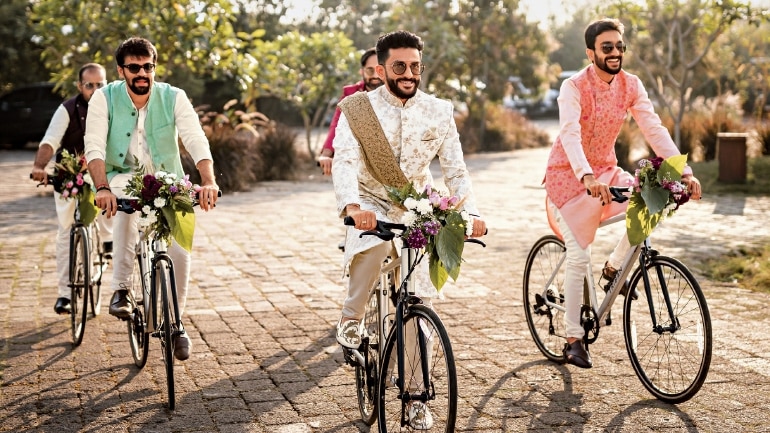 A groom and his baraat arrive on cycles for a sustainable wedding; Photographer: SNAPPED STUDIO Courtesy: WedMeGood

According to Namit Agnihotri, area general manager, The Roseate Hotels & Resorts, “The Covid norms change almost weekly. In January 2022, for instance, we have had almost 60-70 per cent cancellations and about 30-40 per cent postponements.” The Indian wedding market, the second-largest after the US, was impacted severely during the second Covid wave in 2021 when the business was shut down completely. “The size and scale of the wedding industry has been affected to the tune of 60-70 per cent and since a large part of the wedding business is informal, you can understand the impact down the chain. High-end hotels, caterers and florists would be able to quantify the loss in numbers, but what about the small decorator, electrician, cook caterer and the kirana shops?” asks Nilanjan Ghosh, director, Observer Research Foundation, a think-tank in Delhi.

Rajat Ray, a Kolkata-based wedding photographer, used to book 12 to 20 gigs a year, charging 45,000 for each event. In 2021, though, Ray managed to book just six events and had to slash his fee to Rs 25,000. Bhaskar Karmakar, in the profession since 1998, says things have never been this bad before. The photographer, also from Kolkata, had invested heavily in cameras, lights and other accessories for wedding videography shortly before the pandemic. When the pandemic struck, he was forced to do odd jobs to pay the EMI on the loan he had taken to buy the equipment. “I have joined Zomato and am delivering food and grocery orders to be able to earn,” he says.

Prateek Kashyap, founder director of Made in Heaven, a Gurugram-based wedding planning company, says that wedding photography budgets have been cut due to reduction in the number of wedding events. Plus, ceremonies have now changed to, what are known as, “minimonies”—smaller, more intimate events. A few of Kashyap’s clients have even asked for the wedding pictures to be delivered electronically only.

Minimonies also mean that business for bandwalas and caterers has dried up too. With smaller gatherings the new norm, there is no baraat procession. “We used to have 20 to 25 musicians playing in a programme, but now only eight to 10 are allowed. Out of 70 people in my orchestra, I have kept 30 and the rest are on their own, getting by on some token financial assistance,” says Mohammad Zahid of Sohrab Band, Kolkata. Caterers too have seen a reduction in their earnings. Ratan Barua of J.N. Barua Confectionery, Kolkata, has seen a 50 per cent dip in demand and, consequently, earnings, while Ranjan Neogi of Continental Catering Services, a Kolkata-based chain, says he has lost at least 70 per cent of his earnings due to the pandemic.

The millennial’s idea of a wedding is informed by tradition, but is far from traditional. It’s more practical and tech-enabled. They are more conscious about reducing their carbon footprint and making a positive impact. There have been several instances of couples opting for “green” or “zero-waste” weddings, with the bride and groom sending guests home with saplings to plant in their own homes. This need for sustainability is another reason why hybrid weddings have taken off. According to Kanika Subbiah, founder, Wedding Wishlist, an online wedding planning company, “The pandemic may have been a significant factor in the meteoric rise of virtual weddings, but celebrations in India would have gotten here eventually even without Covid. Virtual weddings are cost-effective, better for the environment, easier to organise and more intimate.”

The industry is adapting on the fly. WeddingWire India, a wedding planning app and part of The Knot Worldwide, has partnered with matchmaking portal Shaadi.com as their official vendor partner to launch their WeddingsFromHome campaign.

Technology has played a huge part in the survival of the wedding industry. “Wedtech is affordable, accessible and helps ease communication—physical cards are no good in a world where circumstances and wedding plans change often,” says Subbiah. With the use of technology, couples can communicate better with their guests. It has also helped them shortlist venues via virtual tours, find vendors, make-up artists and mehndi-walas, among other services.

“Wedtech apps are on the verge of becoming a crucial part of the mainstream wedding culture in India,” says Anam Zubair, associate director of marketing, WeddingWire India. As per WeddingWire statistics, there were around 250,000-300,000 couples in India using the internet to find wedding vendors in 2020 itself.

A STEP INTO THE FUTURE

In the final quarter of 2021, as the Delta wave receded, a positive movement in the industry was visible as weddings resumed. The first ‘maha saya’ (auspicious period) on November 21 saw 8,000 weddings held in one day in just Delhi itself. As per estimates by the Confederation of All India Traders (CAIT), around 2.5 million weddings took place in November and December. “On our platform, we witnessed a surge of 57 per cent in November 2021 compared to the same period in the previous year,” says Zubair. They are, in fact, seeing a significant demand for the upcoming summer wedding season, between April 17 and July 22, with 58 per cent of mahurat dates of the year falling in this period.

Interestingly, many couples are opting for ‘non-saaya’ dates. Statis­tics gathered by WeddingWire India reveal a 76 per cent surge in demand for such dates in the first half of 2022 compared to the previous year. Benga­luru has the most demand for non-saaya weddings at 16 per cent, Mumbai follows at 12 per cent and Jaipur, 11 per cent. 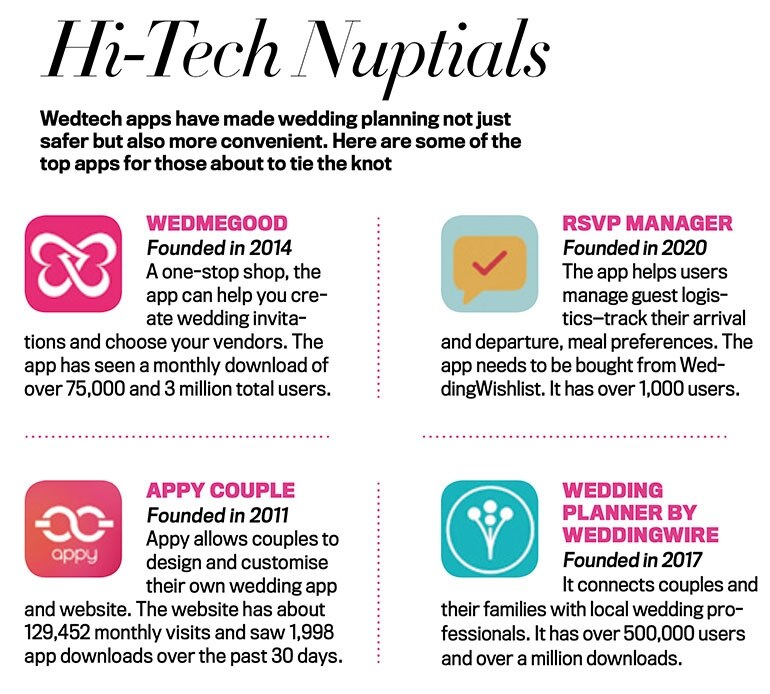 The pandemic might have altered the wedding industry forever, bringing in changes that are most definitely here to stay, according to industry experts. But will the Indian wedding no longer be big and fat? “No! We don’t think the wedding industry will be ‘slim or trim’. The majority of the population still wants to get married with all their family and friends by their side,” says Zubair. The year 2022 might just be one of resurgence for the industry.